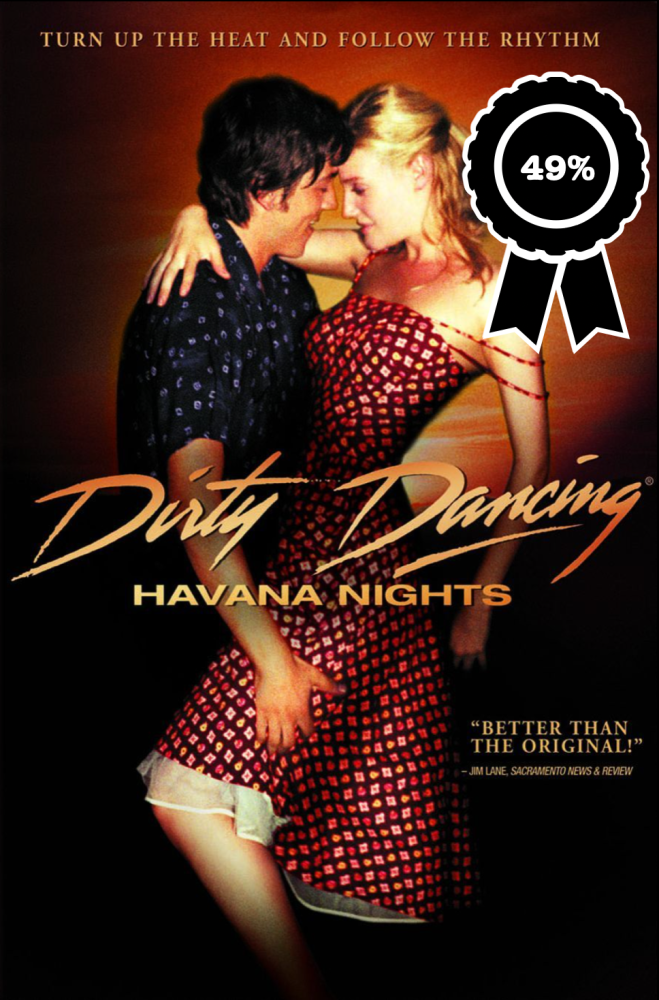 Come for the cuban dancing and infectious innocence of Romola Garai and Diego Luna, Stay for Patrick Swayze’s farewell to Dirty DancinG and a pop-latino Soundtrack of the gods.

Based on a play by NPR’s Peter Sagal, Dirty Dancing: Havana Nights (2004) is set five years before Baby and Johnny lay eyes (and hands) on each other. It is 1958, when bookish, earnest Katey Miller (Romola Garai) and her family are relocated to Cuba for her father’s job. There, she clashes with her snobbish school mates and instead finds a friend in Javier (Diego Luna), a server at the hotel where she stays. After accidentally getting him fired, Katey’s apology comes by way of a Latin ballroom competition with a hefty cash prize, one she believes she and Javier have just enough talent and passion to win. Set against the backdrop of the Cuban revolution, Javier and Katey discover new worlds in each other, the dances they share, and the troubled country around them—soon to gain independence.

SUMMARY
The soundtrack alone makes this film a worthwhile stop on dance-movie night. While, of course, related to Dirty Dancing (1987), Havana Nights (2004) is incomparable in good ways and bad. It does not come close to the triumph of its predecessor, nor does Dirty Dancing Sr. approach the historical intensity of this sequel. The flavors are different, rich in different ways, and not equally satisfying.